West Wimmera Health Service’s Chief Executive Officer, Ritchie Dodds, will take on a marathon distance run to support the Service’s latest fundraising campaign. The run will commence at the Nhill Hospital and will finish at the Jeparit Hospital measuring 42 kilometres from point to point.

The run to Jeparit was an idea born in early 2020 and is a more ambitious distance than Ritchie has ever tackled before. “It’s about drawing attention to the fundraising campaign specifically to hopefully help raise as much as we can for vital eye surgery equipment. But it’s also about raising awareness of the wide open spaces of the Wimmera generally and what a wonderful place it is to live in which might help with our future efforts to recruit staff”, said Ritchie. “It’s certainly not about breaking any records that’s for sure but we’re hoping it will be like the hare and the tortoise and the slow approach will pay off okay in the end!”

Ritchie stepped up his training in January this year and has managed to keep it up fairly well so far. “Having this goal of just making 42kms has made a big difference in my motivation to get out and train”, said Ritchie. “Running, or I should say jogging, every day or every other day can become a bit tedious so to have this extra reason to go out and do it has certainly helped. Although I have always enjoyed jogging, particularly on dirt roads in the country. It helps clear your mind and gets you a little closer to nature which is always a good thing I rekcon”.

The initiative will consist of both running and walking to cover the 42 kilometres and aims to raise funds for the much-needed IOL Master 700; a key piece of eye surgery equipment. 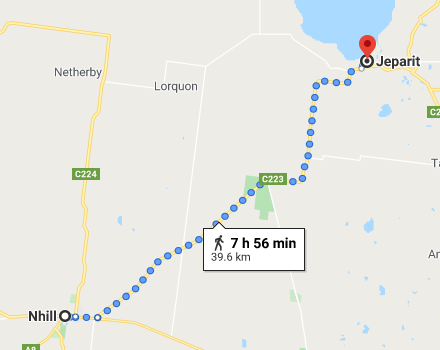